Wondering what’s Netflix VPN ban? It is a geo-restricted policy of the platform that restricts you from streaming different media libraries of Netflix. For more clarity, you can’t access any show/series that lacks content licensing in your current region.

You’ve probably encountered the Netflix VPN block if you’ve attempted to use a Virtual Private Network to access a different Netflix library. Don’t worry anymore because this article will show you how to beat the Netflix VPN ban without any hassles.

Undoubtedly, Netflix provides the best entertainment and 203.67 million global subscribers are proof of this statement despite the Netflix VPN block. With its extensive content collection, it is still holding its position as the most popular streaming hub.

As the content choices can be extended by unblocking foreign Netflix libraries by connecting to the server of the best VPNs for Netflix, it adds to the appeal of Netflix over other streaming options such as Disney Plus, Hulu, Amazon Prime Videos, and HBO Max.

If you are a Netflix user and don’t know why a VPN is your best friend, you are missing out on the largest part of the entertainment. Let’s discuss what is VPN ban, how to use a VPN on Netflix, and to make every penny count.

Here are the simple steps which can help you bypass the Netflix VPN ban: 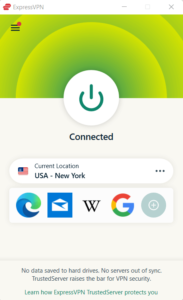 Connect with ExpressVPN’s US server

What is the Netflix VPN Ban?

Netflix wants its users to stick to the content available in their region and try to identify proxies and VPN servers. The Netflix blocking VPN approach is known as the Netflix VPN ban.

Netflix library varies from region to region. As users try to access the content available on Netflix libraries of other countries. If they don’t find what they need, they might cancel their subscription.

But there is no need to cancel your Netflix subscription because we have the perfect solution; a Netflix VPN.

Why does Netflix Ban VPN?

Netflix blocks VPN as it does not have the right to stream the content in certain regions. When a user tries to access the content not available in their region, it is a violation of the copyright agreement, and streaming companies are responsible for preventing this violation.

As Netflix built its reputation as a fair streaming service over the years, it does not want the hassles of copyright violation and lawsuits and this is why it bans VPNs.

The majority of the distributors sell their program’s rights in a specific location, it’s known as territorial licensing. Netflix admitted that the ideal goal would be uniform content across all libraries. The lack of completely global licensing is a hurdle towards this goal.

Even though the subscriber number can be increased manifold by releasing this policy, but we don’t see this happening soon. As copyright and licensing agreements vary in every country, we have to continue using a VPN for accessing foreign Netflix libraries.

Bypassing the Netflix VPN ban is easier for some VPN due to the sheer number of servers operating in different locations.

Netflix banned various VPNs that has lousy or weak servers and connectivity. So, we tested 70+ VPNs and finalized the list of 3 VPNs that can bypass the Netflix ban easily, let’s find out:

ExpressVPN is considered to be one of the best and fastest VPN for bypassing Netflix VPN ban. As it doesn’t slow down your internet speed, it offers you the smoothest streaming experience.

The VPN offers 3000+ servers in 90+ countries, so the chances are lowest that Netflix detects and ban them.

As there is a large pool of available servers, there are fewer chances of getting interrupted by proxy error. With highly advanced VPN protocols like PPTP, OpenVPN, and L2RP/IPsec – you can access every Netflix library.

Check out the ExpressVPN Netflix guide to learn more about how it helps in bypassing the Netflix ban.

Get ExpressVPN For Netflix30 Days Money Back Guarantee

NordVPN offers 5,100 servers in 60 countries ensuring that you can bypass Netflix ban easily along with the speedy connections for streaming. Either you can select the server location manually or automatically connect to the fastest server – the choice is yours.

NordVPN utilizes SmartPlay technology to help the users bypass geo-restriction of the majority of the treating sites. The streaming content is blocked immediately by a kill-switch if the VPN connection drops.

Check this NordVPN Netflix guide to learn more about how it helps in bypassing the Netflix ban.

Get NordVPN For Netflix30 Days Money Back Guarantee

3. Surfshark – Bypass Ban of VPN from Netflix in Limited Budget in USA

Surfshark, having the cheapest price tag of US$2.49/mo , is undoubetly the best to bypass Netflix VPN ban. With the extensive collection of over 3000 servers operating in around 70 countries, the chances of getting the Netflix proxy error are thin with Surfshark.

Surfshark can let you choose any location you want with a simple click. The internet restriction is overcome by a unique “No Border” feature while hiding with the “Camouflage” mode.

The feature that makes Surfshark stand out in the list of hundreds of VPN is simultaneous unlimited connections that can help you enjoy Netflix on Mac, iPad, Roku, PC, Amazon Firestick, Laptop, gaming consoles, Linux, and many other devices at the same time.

Check this Surfshark Netflix guide to learn more about how it helps in bypassing the Netflix ban.

Get SurfShark For Netflix30 Days Money Back Guarantee

How does Netflix Ban VPNs?

Netflix blocking VPN technology is pretty advanced. As your IP address show where you are located, this address is also used for identifying if you are using a proxy.

If a large number of users are accessing Netflix from the same IP address, it is highly unlikely that are living in the same house. This is when anti-VPN software comes into action and bans the server IP.

What did Netflix have to say about it?

Netflix plays the role of reluctant policeman in this case. Here is the official statement which shows the reasoning of “why is Netflix blocking VPN.”

For now, given the historic practice of licensing content by geographic territories, the TV shows and movies we offer differ, to varying degrees, by territory. In the meantime, we will continue to respect and enforce content licensing by geographic location. Some members use proxies or “unblockers&rdquo; to access titles available outside their territory. To address this, we employ the same or similar measures other firms do… That means in the coming weeks, those using proxies and unblockers will only be able to access the service in the country where they currently are.

What will happen if you get Caught using a VPN?

Netflix threatens the users with an account ban if they are found using a proxy or VPN server. So far, there is not a single report of this actually happening.

Usually, Netflix makes it difficult for the users to stream the show they want. Often it shows Error Code M7111-5059 which is a warning to disconnect from the VPN server.

How can a VPN Fool Netflix?

First of all, let’s clear that every VPN cannot fool Netflix. Only the premium VPN services with a large number of servers operating in different countries can fool Netflix.

Even when the anti-VPN software of Netflix identifies and block a server, VPN providers can replace the blocked server with a working one, making sure that users can enjoy a smooth streaming experience.

VPNs work by masking your real IP address. Imagine you are living in the US and want to “watch Vikings on Netflix US” available in South Korea. As your IP address shows that you are located in the US, your local Netflix library cannot provide you with this show.

When you connect to the US servers of the VPN, your IP address will change to US-specific IPs (changing the Netflix region). Now as you are pretending to be an American, you can access US Netflix with no issue.

Similarly, you can watch different Netflix libraries by doing so. Also, you can check out the guide for watching American Netflix in Ireland.

How is Netflix able to Identify VPNs?

If Netflix notices that a huge number of people who are unlikely to live in the same home are using the same IP address to access the platform, raises a huge concern. Thus, Netflix identify those IP locations and mark them blacklisted.

VPNs that are not Compatible with Netflix?

Almost every VPN claims that it works with Netflix to provide unlimited content, but this is not the case. After testing the VPN’s ability to unblock foreign Netflix libraries, we have found that these VPNs cannot bypass the Netflix VPN ban.

How can Netflix ban VPN?

Netflix can ban VPN with the help of IP addresses. If hundreds of users are accessing Netflix from similar IP addresses, it is highly unlikely that they are crowded in the same house. Anti-VPN software of Netflix identifies such IPs and ban them.

Why geo-blocks are used by Netflix and other streaming services?

To secure and maintain business model without violation any legal obligations, Netflix and other streaming services use geo-blocks. They also limit the media library for their customers based on their different locations.

How to figure out if your VPN bypasses the Netflix VPN ban?

There are various approaches you can use to know if your VPN bypassed the Netflix VPN ban. One of the easiest ones is to check the most-watched shows in the region. If you are connected to an American server, now check if the homepage is showing most-watched in the US.

Though Netflix tries to ban VPNs, it needs more advanced technologies as the current strategies are not ideal. Until Netflix does not take strict actions against VPN users, you can easily enjoy foreign Netflix content.

Now you know how to bypass Netflix VPN ban using ExpressVPN. All you have to do now is grab some drinks, a bucket of popcorns, and enjoy unlimited Netflix shows and movies. Happy streaming!