25 Best Horror Shows on Netflix Canada – Get Ready For Nightmares

Few can relate to the thrill of blood-curdling screams, and fewer can appreciate the scare of blood dripping from the roof. But, if you are a fan of these scenarios, you have come to the right place. Today, we will discuss the best horror shows on Netflix Canada, and let me tell you this, picking the right show for binge-watching is tiresome. 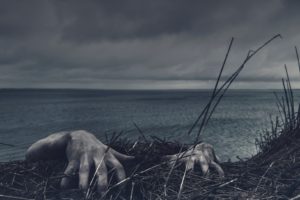 With multiple categories and subcategories specified for horror shows, it becomes hard to pick the must-watch shows on Netflix. This list includes the top horror picks available on Canadian Netflix. Being true to the motto of horror, ‘the gruesome, the better,’ you can count on our pick being the scariest.

Let’s begin the journey full of zombies, ghosts, ghouls, and the unfortunate human who will target these supernatural creatures.

Simultaneously, two widows of the deceased sheriff who cursed Wyatt Earp attempt to revive him. The suspense, thrill, and the apparent appearance of the dead make it one of the best horror shows on Netflix Canada.

It follows a group of survivors headed by former police officer Rick Grimes to search for a safe and secure home.

The survivors’ interpersonal issues represent a more significant threat to their survival than the walkers wandering the country as they struggle with the repercussions of a world overrun by the dead.

3. The Haunting of Hill House

The experience continues to haunt them in the present day, and flashbacks detailing events leading up to the family’s escape from the house on that fateful night in 1992.

4. The Curious Creations of Christine McConnell

Christine McConnell, an artist and baker who lives in a house full of monsters and spirits, is the program’s protagonist.

It’s a mix of DIY and scripted reality, and it’s about annoyances like neighbours and relatives, as well as what to wear on a first date with someone you met at the graveyard.

With the assistance of their Angel buddy Castiel and the King of Hell Crowley and some other hunters, they encounter along the road, Sam and Dean Winchester travel throughout the nation seeking supernatural entities.

Will Byers, a little child, goes lost near a top-secret government lab leaving the relatives and friends desperate to find the truth.

Friends, relatives, and local cops are dragged into a fantastic mystery involving top-secret government experiments, terrible otherworldly forces, and one unusual little girl as they hunt for answers.

Even while monster mashes have been around for a long time, they don’t have the same level of dedication as Penny Dreadful.

Dr. Frankenstein and his monster, the Wolfman, and Dorian Grey are among the classic figures featured in the three-season series.

The show is set mainly in Victorian England and has all of the elements of gothic horror. However, because these creatures are classic literature products, they must be treated with respect, and the narrative does so.

Mindhunter follows FBI agents Holden Ford and Bill Tench, as well as psychologist Wendy Carr. They work at the FBI Academy in Quantico, where they find how twisted a criminal’s mind can be.

Considered one of the most notable hits, Lucifer is regarded as one of the best horror shows on Netflix Canada. The devil wants to know your deepest darkest desires.

With a cult following, there is no doubt that this last appearance of the devil himself will leave you wanting more. The story is based on the character of Lucifer, who got bored with hell and started enjoy human life.

From experiencing human emotions to working alongside a detective to solve complex cases, Lucifer will mesmerize you with his style and appeal.

Hope Mikaelson is the daughter of Klaus Mikaelson and Hayley Marshall, and she is descended from some of the most powerful vampires, witches, werewolves, lineages in the world.

Hope, 17, joins the Salvatore School for the Young and Gifted two years after the events of The Originals.

Liz is a medical student who will have the perfect job; she currently has a perfect life and fiancée. But, unfortunately, she loses everything the night she turned into a zombie.

She cannot relate to a zombie situation with a less-than-normal heartbeat and the ability to walk and talk usually.

To think like a human, she needs the diet of the human brain. As she laded a job in a local morgue, she can access an unlimited supply of brains. As she is working with humans and using her newly-got vision, she is working to better society.

Young Zach Cooper, unhappy about relocating from the big city to a tiny village, discovers an exciting truth when meeting his neighbour Hannah.

R.L. Stine is Hannah’s father. He is the best-selling author of the “Goosebumps” series.

When Zach unintentionally releases the monsters from the beautiful tales, it’s up to Stine, his daughter, and Cooper to return them to their rightful places in the books.

From his roots in Eastern Europe to his confrontations with Van Helsing’s progeny and beyond, the story chronicles Dracula.

“The Count Dracula legend evolves with fresh tales that flesh out the vampire’s horrific crimes—and bring his vulnerability into the light,” according to Netflix’s synopsis.

Devilman is a fictional character. But, unfortunately, crybaby is no stranger to plunging into the murky depths of obscene imagery. As Akira seeks to protect his friends and family from the world’s actual ills, disembowelment is typical.

When you become the darkness, though, it’s challenging to keep the darkness from devouring you.

Even though it is classified as science fiction, this series may effectively scratch the horror itch by ensuring that you experience gory and terrible occurrences. The plot revolves around a village that lies above a time portal.

This series is interesting because of the intricate character web and accompanying intrigues. It’s eerie, dark, and moody, with a surprising ending.

Sabina is a modern teenager who is also a witch. This series is included in the list of the best horror shows on Netflix because of the contemporary take on horror’s age-old concepts.

It is bright but chilling as Sabrina is involved in activities that can make you scream in fear. The adventure of a teenager witch can be gruesome, and this show is proof of this statement.

Relate to Sabrina and accompany her on the journey of becoming an accomplished witch.

Castlevania includes all the supernatural characters, including demons, the devil, and Dracula. When his better half is scorched at stake in the wake of being dishonestly blamed for witchcraft, the vampire Count Dracula announces every one individual of Wallachia will pay with their lives.

He brings an army of devils, which overwhelms the nation, making individuals carry on with lives of dread and doubt.

Finally, there’s a choice that focuses entirely on zombies. This series focuses on the genuine zombie survivalist and has some of the finest zombie combat sequences. It is a must-watch for anybody interested in learning what the undead can accomplish.

Rose’s primary character is searching for her kid amid a zombie apocalypse that is quickly expanding. The pick of relatable individuals gives this horror a feeling of realism.

It’s a contemporary prequel to Psycho, depicting how Norman Bates’ mind unravels during his adolescent years, as well as how complex his connection with his mother, Norma, is.

As the show progresses, we learn more about Norma and Norman’s relationship and how Norman got to be the way he is.

Ash is a chainsaw-handed monster hunter, lothario. He has gone through the most recent 30 years, staying away from obligation, development, and the dread of the Evil Dead.

When a deadly plague takes steps to obliterate the entirety of humanity, Ash is at last compelled to confront his personal and literal demons.

If you are looking for a classic soapy drama with a horror twist, The American Horror Story should be on your must-watch list. However, it is more about horror and less about the story.

Each season something new related to the concept of horror; can be tales of terror, kink, or horror traditions.

It brings new fright and includes anti-Christ, ‘freak show’ performers, witches, ghosts, serial killers, and a clown who is terrifying more than funny. The title of the show is an indication of the creepiness of the show and the focused story.

Although it is classified as a science fiction show, it contains all of the elements of a horror series. When the first six episodes were released, the public was entirely enthralled by the series.

It’s been dubbed the “contemporary Twilight Zone” since it addresses various subjects such as sorrow, politics, drama, ambition, and hate.

It can make you scream even if it isn’t full of demonic beasts and axe-murderers. Instead, the series focuses on the idea that monsters can come in the human form, making it one of the best horror shows on Netflix Canada.

The Staircase delves into the complicated case of Michael Peterson, a novelist who was found guilty in 2003. He was found to be the murder of his wife, Kathleen Peterson. She was discovered unconscious at the foot of their home’s staircase.

A pledge dies after giving birth in a bathtub during a Kappa Kappa Tau sorority party in 1995. Grace Gardner is a current Wallace University student who intends to join Kappa Kappa Tau in honour of her mother, a member of the fraternity.

Chanel’s popularity suffers due to Kappa’s compulsory acceptance of anybody who desires to join; as a result, her lover, Chad Radwell, terminates their relationship.

Kappa’s housemaid, Ms. Bean, is slain in the deep fryer, and her body is buried in the house’s storage freezer. Grace teams up with investigative reporter Pete Martinez to bring down Chanel and restore KKT’s image.

You have the list of the best horror shows on Netflix Canada, so get ready for the scares. This selection offers horror at its best with the selection of modern to classic horror. If you are a fan of horror shows, these recommendations will be a worthy addition to your list of must-watch horror shows.

Even though you can enjoy our recommendation on any device compatible with Netflix, we would advise a Smart TV to get the feel of bone-chilling horror on a widescreen.

Though you can watch anything and everything on Netflix, including comedy, thriller, horror shows, suspense, horror movies, cartoon, anime, romance, cooking shows, sci-fi, reality, emotional drama, and documentaries – you cannot get better than horror shows.

Enjoy the top horror picks at your own risk! Happy streaming.